This Dutch Startup Converts Heat Into Cold Via A Stirling Engine, And Could Just Save The Planet

By 2050, almost six billion air conditioners could eat 37% of global electricity, according to the International Energy Agency. That’s because as India and China get richer — and the planet gets hotter — people around the globe are buying A/C units at levels approaching the United States.

This is an environmental catastrophe waiting to happen.

But one startup from the tiny town of Enschede in the Netherlands aims to change that via a technological marvel that turns heat into cold without requiring energy itself — or any of the nasty gases that most A/C units use today. The technology, which SoundEnergy unveiled at CES last week in Las Vegas, uses a process similar to a Stirling Engine, which was first conceptualized 200 years ago in the early 1800s.

It sounds like magic, or a perpetual motion machine, but it relies on well-understood principles of thermo acoustics and was originally developed in U.S. Department of Defense research, the company says.

The first step is transforming heat into sound. 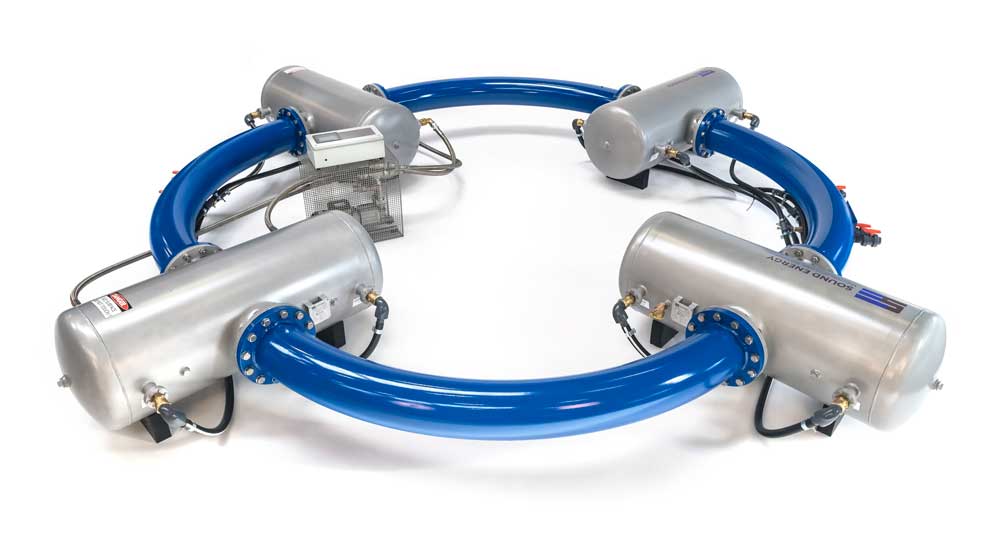 “We take thermal energy … [and] we transform this thermal energy into an acoustic wave,” SoundEnergy CFO Roy Hamans told me at CES last week. “This wave travels through a pressurized infinite loop (the blue ring in the picture on our website) in which it continues to be amplified … the feedback process makes the sound wave stronger and stronger.”

So far, so good. SoundEnergy has built a machine to turn heat into mechanical energy.

But eventually, you want more. You don’t want to just remove heat … you also want to return cold. And, according to Hamans, SoundEnergy’s device does that as well.

“This huge mechanical power will be transformed into a delta T [lower temperature] down in the last two vessels by connecting them in reverse,” he told me via email this week. “The sound waves produce cold by distracting the heat from the particles like in a classical Stirling cycle.”

If you don’t understand how that works, you’re not alone. I don’t either. Hamans tried to comfort me that saying that only about two or three dozen people globally, all experts in thermo-acoustics, truly understand this process.

One of the reasons why?

This high-tech A/C unit does not itself require power.

“The system itself does not consume electricity/energy,” Hamans told me via email. “It takes 100% of stack-emitted waste energy, or solar thermal … and converts that for 40-50% [efficiency].”

The rest of the heat can get discharged into a cooling pool, or the atmosphere, or, if absolutely required, cooled with a standard A/C unit. The only parts that potentially use external power to run would be a small controller unit for more precise calibration, and of course pumps to circulate heat-bearing fluid in and cold fluid out.

The system is ideal for industrial use where high-temperature motors and equipment needs to be cooled, but can also be used for large multi-family housing units. Large units run about $50,000, though prices will drop with scale, and smaller units for residential/consumer purposes are possible at much lower prices.

Hamans says the systems pay for themselves.

“For commercial and industrial use we are talking about only a few years to five years payback time,” he told me. “[Also factor] in that our systems have an expected life time of 20-30 years, which to our knowledge is substantially longer than electric compressor based systems.”

Financial payback is one thing.

But if the company can help solve the global energy challenges while also helping us cool our homes, offices, and factories efficiently, the environmental payback may very well outweigh the financial considerations.

The company’s next steps?

“Our strategy so far is demonstrating commercial and technical feasibility per industry, upscaling from a few launch customers to multiple, globally,” says Hamans. “These industries include but are not limited to heavy industries like (petro)chemical and process industries, food & beverage, textiles, metal, hydrogen, and mobile/stand alone systems which can operate in remote areas. Further we can also cool spaces/buildings, and cold chains for fresh produce or medical supplies, particularly also in hot areas, grid independent.”

Those are big plans.

But unaffiliated experts believe that the tech is real, and that there is significant opportunity here.

I spoke to Steven Garrett, former professor of acoustics at Penn State. He’s also an adjunct professor at the University of Massachusetts, and an associate researcher at an acoustical lab associated with the University of Mans in France. Garrett knows what he’s talking about: he put a cooler built with related technology into NASA’s space shuttle in 1982, another into a Navy destroyer, and worked with Ben & Jerry’son innovative cooling concepts in the early 2000s.

Garrett strongly vouched for the technology, and especially the originator of it, Kees de Blok.

“There are quacks all over the place in thermo acoustics,” Garrett told me. “But de Blok is better than I am … he is the real thing. What he has done is amazing.”

“You must be critical when examining the field,” Garrett continued. “But de Blok is not a quack. He did not get to that device overnight, and his credibility is the highest in the field.”

The technology is currently in use in multiple facilities around the globe, including a school in the Netherlands. The system is maintenance-free and requires almost no energy to run, according to the school.

John Koetsier is a journalist, analyst, author, and speaker. Follow him on Twitter or connect on LinkedIn.